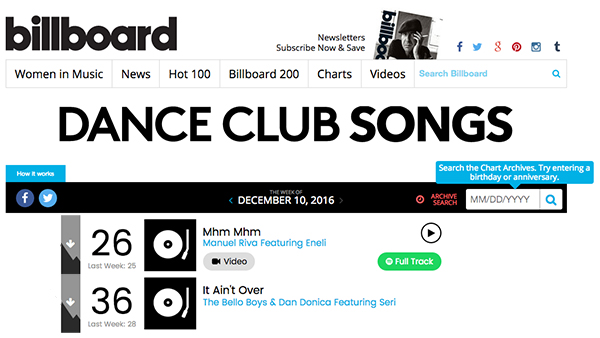 Billboard has just rolled out the Top 50 Dance Club Chart for the week of December 10th. Radikal Records is excited to have two singles crack the top 50 chart! DJ Manuel Riva and Eneli’s “Mhm Mhm” has come in at #26, while The Bello Boys and Dan Donica’s “It Ain’t Over (feat. Seri)” is currently residing at #36. The singles are in good company alongside “Closer” by The Chainsmokers featuring Halsey, “Smile” by Gorgon City featuring Elderbrook, and “Perfect Illusion” by Lady Gaga.

The Billboard Dance Club Chart represents the week’s most popular songs played in dance clubs, complied from reports from national sample of club DJs. Radikal Records would like to thank the DJs and listeners for the continued support of both of these records!

Watch the music video for “Mhm Mhm” below:

“Mhm Mhm” is available now for download on iTunes, Beatport and Bandcamp. You can also stream the single on Spotify and SoundCloud, or check out the official music video on our YouTube Channel. “Mhm Mhm (Remixes)” is available on for digital purchase on iTunes, Bandcamp, and Beatport. Stream the first 3 tracks on SoundCloud.

The Bello Boys and Dan Donica’s new single “It Ain’t Over (feat. SERI)” is now for digital purchase and streaming. Purchase the single on iTunes, Bandcamp and Beatport. Stream the single on SoundCloud or Spotify. “It Ain’t Over (feat. Seri) [Remixes]” is now available for digital purchase on iTunes and Bandcamp. It is also available on Spotify and other streaming platforms.