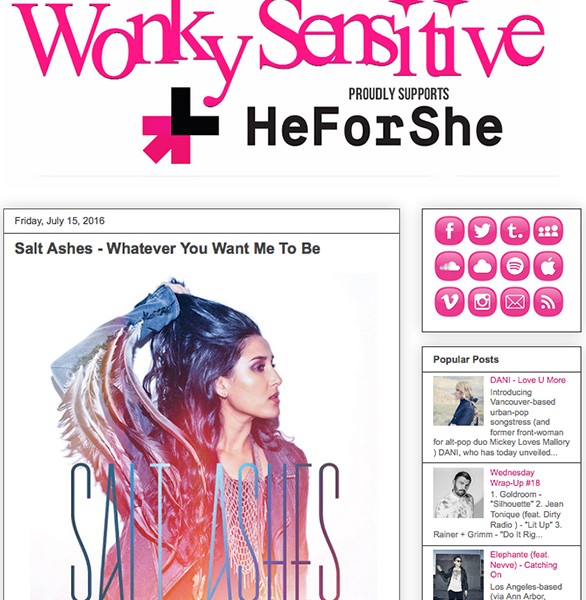 Music blog, Wonky Sensitive featured the Brighton-based singer/songwriter Salt Ashes, aka Veiga Sanchez on their website after the release of her highly anticipated debut album. Salt Ashes has had a big month, first with the release of her beautiful new track, “Whatever You Want Me To Be“and finally with the release of her groundbreaking self-titled debut album. The 14-track album also includes her 3 previously released tracks“Somebody“, “If You Let Me Go“, a Top 5 record on both Billboard and Music Week Dance Charts, and “Raided“, a BBC introducing and Spotify fan favorite.

Speaking about the track, “Whatever You Want Me To Be” Salt Ashes says:

“I love performing ‘Whatever You Want Me To Be’, which is actually one of the slower ones on the album. But I just really like getting into it and connecting with the song, even though it’s not a personal subject. It’s actually about a documentary I saw on Edie Sedgwick. It’s about my take on what I thought she might have been feeling in that particular documentary. But I just love performing it. I like the build, the crescendo, and the actual production of it, which I can really connect to.“

Listen to “Whatever You Want Me To Be” below:
If you haven’t had a chance to listen to this iconic album make sure you check it out, “Salt Ashes” is now available for purchase in record stores nationwide, on Amazon,iTunes, Bandcamp, Google Play, and in the Radikal Records web-store. It is also available for streaming on Spotify.

For the full article head over to WonkySensitive.com