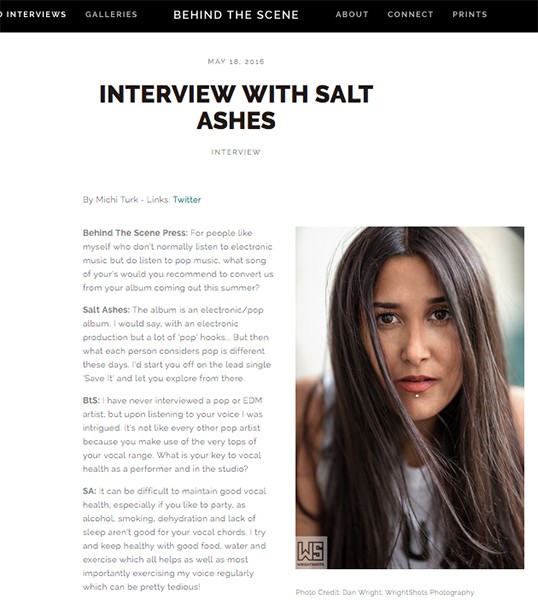 Behind The Scene’s Exclusive Interview With Emerging Artist Salt Ashes

During her recent trip to New York City, emerging singer-songwriter Salt Ashes caught up with Behind The Scene, music blog who has all your access in today’s music scene. Behind The Scene took Salt Ashes on an exclusive tour of the city while the spoke about her new single ‘Save It,’ upcoming album, her unique sound, and much more. Check out some of the exclusive interview below, but be sure to head over to Behind The Scene to read the full article.

Behind The Scene Press: For people like myself who don’t normally listen to electronic music but do listen to pop music, what song of your’s would you recommend to convert us from your album coming out this summer?
Salt Ashes: The album is an electronic/pop album, I would say, with an electronic production but a lot of ‘pop’ hooks… But then what each person considers pop is different these days. I’d start you off on the lead single ‘Save It’ and let you explore from there.

BtS: Your self-titled album has a nostalgia for 70s disco with your fantastic airy vocals and strings. It’s always a beautiful to hear something that brings up memories of songs we weren’t alive for. Would you say you’re a big fan of disco? Do you have any favorite disco songs?
SA: Definitely a fan of disco. I love the whole Studio 54 era and not for just the music but for the clothes and the mentality too. The first song that really got me into disco was ‘Hold Tight’ by Change which is really post-disco but this lead me to discover ‘I Feel Love’ by Donna Summer.

BtS: What advice would you give to a DJ, vocalist, or musician who wants to get into writing the type of music that you do?
SA: Throw all of yourself into it… don’t be afraid.. and always make the music you want to make and not what you think people want to hear.

Listen to Salt Ashes’ brand-new single ‘Save It’ below:

Salt Ashes’ ‘Save It’ is available for digital purchase on iTunes and BandCamp. Streaming the single on Spotify and SoundCloud.