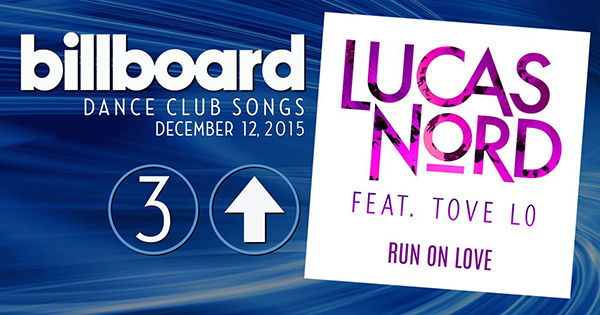 In case you missed it, Lucas Nord’s “Run on Love (feat. Tove Lo)” has landed on Billboard’s Dance Club Songs Chart. “Run on Love” resides at #3 for the week of December 12th. Nord’s single was previously #5 on the chart. This is the 8th week that the single has been on the chart. The two songs above Nord’s are “Levels” by Nick Jonas and “Confident” by Demi Lovato. Thank you to everyone who has been supporting the record! Lets try to get “Run on Love“ to number 1! Check out the full chart on Billboard.com.

Watch the “Run on Love“ music video below:

Both volumes of Run on Love [2015 Remixes] are available for digital purchase and streaming in North America. Stream Run On Love on Spotify, Beatport, and Bandcamp. Purchase the single on iTunes.