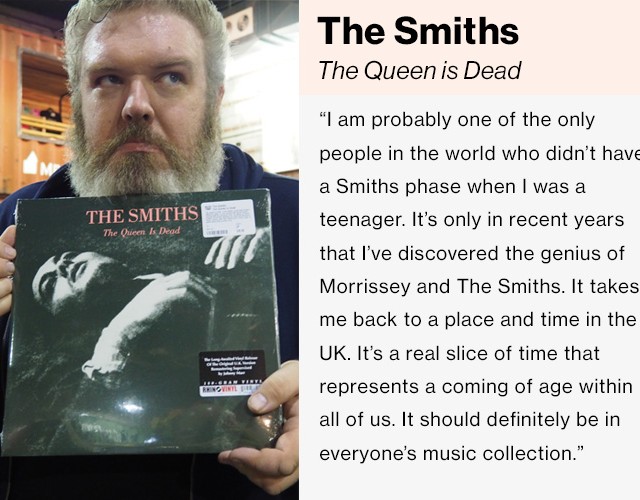 Have you ever wondered what it is like to go record shopping with DJ Kristian Nairn? Well, Verizon Fios Lounge was able to spend time record shopping with Nairn while in New York City. Some of Nairn’s choices may surprise you. Nairn spins dance music, but loves rock ‘n’ roll. Check out some of Nairn’s picks below, to see his full list of picks be sure to head over to Verizon Fios Lounge.

Fleetwood Mac‘s “Greatest Hits” made the list of Nairn’s favorites. “I was looking for Tango in the Night but it wasn’t here. This album is a close second, one the first albums I bought purely on visual artwork. I was only a kid and saw this beautifully artistic cover with a jungle and toucans and I thought, ‘I want that album.’ My mom though I wouldn’t like it, but boy was she wrong. They’re one of the greatest musical acts of all-time.”

The Smiths‘ “The Queen is Dead” album also made Nairn’s list. “I am probably one of the only people in the world who didn’t have a Smiths phase when I was a teenager. It’s only in recent years that I’ve discovered the genius of Morrissey and The Smiths. It takes me back to a place and time in the UK. It’s a real slice of time that represents a coming of age within all of us. It should definitely be in everyone’s music collection.”

Narin’s last selection was Slayer‘s “Decade of Aggression.” “I swapped all my comics for a backstage pass the year Slayer played Donnington. It was worth it. I managed to meet [Slayer members] Tom Araya and Kerry King. I was over the moon about it. I remember standing in the mud at Monsters of Rock and by the end of the fifth Slayer song I had passed out. I had head-banged so much that my brain shut off. One of the best days of my life.”