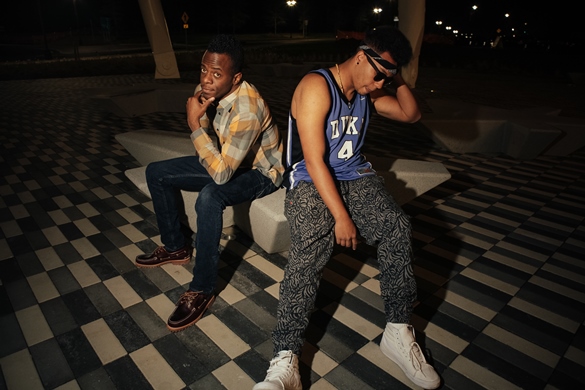 Step inside their universe, and get to know ,I.O.U., acronym for Inside Our Universe, comprised of Izee and Buck, two young artists from South Brunswick, NJ who have created a following with their clean mainstream pop/hip-hop sound, comparable to acts such as Black Eyed Peas, and Outkast.

The boys rose to local stardom under the stage name Deuce 1’s during their freshman year of college when they released ‘Rutgers State of Mind’ their take on Jay-Z and Alicia Keys’ ‘Empire State of Mind.’ The song became a Rutgers anthem, and the following year Buck and Izee linked up to record ‘Black and Scarlet,’ their take on Wiz Khalifa’s ‘Black and Yellow’ which landed them the title of ‘Rutgers’ Official Rap Group,’ and left many fans wondering, what can we expect from these guys next?

A few months later, the fellows holed themselves up in their studio, changed their name to I.O.U., a name they felt was more meaningful, and set out to break their mind barriers, figuratively, by producing and recording their self-released mixtape ‘Breaking Our Mind Barriers’ or ‘B.O.M.Bs.’ released summer of 2011, which made its round in the blogosphere.

Three mixtape releases later, garnering attention from their Rutgers University colleagues and fellow college students across the country and beyond, opening for countless acts such as Big Sean, Far East Movement, Jake Miller and more, the boys linked up with Radikal Records to release their debut album “The Soul & The Intellect.”

The title of the album reflects the characters of both Buck and Izee, laidback Buck being the soul of the duo, and methodical Izee, producer behind the entire project, the intellect. Also featured as a vocalist on two tracks off the album is Evangelia, a Rutgers University student. When she’s not studying t be a teacher, you can catch her performing at the local coffee shops armed with her guitar and powerful voice.