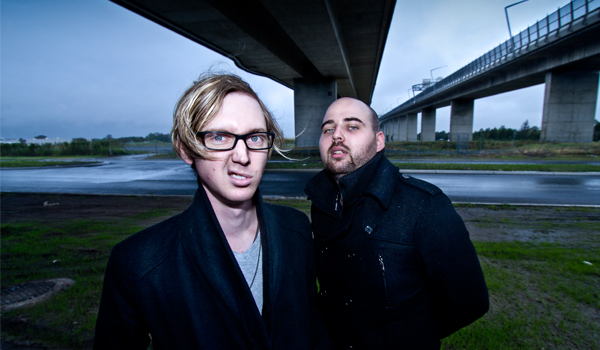 Brisbane fused a wealth of talent in duo Slop Rock. For Mitch and Tomy the evolution from chunky band material to the leading electronic approach encouraged a musical virtuoso. Heavy on the electro and progressive tips, this finely tuned duo sets a standard worth taking your earplugs out for.

Consistently sitting on the charts, Slop Rock has seen remixes for Milk & Sugar, MYNC, PeaceTreaty and chart topper Danny T take up to 4th spot while paragons like Hero and Revolution have all embarked on Beatport and ARIA Chart raids. Outside of the charts Slop Rock aren’t shy of a play on national radio as well as spins on BBC Radio 1, Tiesto’s ‘Club Life’ & Fedde Le Grand’s ‘Dark Light Sessions’ while fellow Aussies The Stafford Brothers and Tommy Trash feel the inclination to drop a SR bomb on the festival stage too!

The adrenaline of these artists boils up a ruckus in consoles throughout hometown Brisbane with The Met residency, clubs around Oz and last but not least bangin’ festivals Blah Blah Blah, Future Music, Stereosonic and Parklife…with a few more bill spots on the way. It’s these shows that tease the norm supporting the likes of Hard Rock Sofa, The Loops of Fury, Firebeatz, Boys Noize and prized opening sets for Steve Aoki & Tommy Trash.

With their roaring single featuring the vocal styling of American smooth liner Whiskey Pete ‘Super Dope’ earning a staggering #4 spot in the ARIA Charts, a barricade of studio requests and bills to headline a nation, Slop Rock are bound for a takeover.

WHISKEY PETE dominates dance floors.
Put a mic in WHISKEY PETE’S hands and watch this party animal whip any crowd, club, festival, rave or show into a complete madhouse. Put him in the studio and he’ll deliver every time with his signature sing- along hooks, razor sharp verses and sure fire party anthems that are guaranteed to have any block in any city jumping and going buck wild. It doesn’t matter what genre or style it may be, if it makes the girls drop it down low and the homies heads bump, chances are he’s on it because WHISKEY PETE is the original certified party-rocker and one of
today’s most recognized vocalists in dance music.

With a huge stack of over 70 individual label releases on ITunes and Beatport, he has had dozens of those releases jump into the top ten charts again and again. The drumstep anthem with Figure, “Cut Throat” reached #1 on the Beatport charts and stayed in the #1 spot for over two months. During the same time period three other WHISKEY PETE tracks were all charting top 10.

His voice has been heard over the likes of Electro House, Breaks, Dubstep, Drumstep, Drum & Bass, Moombahton, Hip-Hop, Indie dance, House and every other sub-genre under the sun..