After over 40 years since its original release, a new version of “I Don’t Like Mondays” by Irish new wave group, The Boomtown Rats is ready to smash everyone’s replay button. The hit single gets reimagined in the collaborative project from the song’s original co-writer, Johnnie Moylett (AKA Johnnie Fingers) performing now as MOYLETT, along with producers Moonsound and Bedroom Heroes.

A first mix of “Mondays” dropped in 2021 from MOYLETT and Bedroom Heroes, but now top Romanian producer Moonsound has teamed up with the musicians for a fresh take on the track. Featuring the vocals of singer, Nika the group manage to create a totally different vibe with “Mondays”, with this newly remixed version amplifying the dance elements of the original single with bright electronica production and pulsating synths.

We may still not like Mondays – but this new mix will very likely become the song to start your week with.

“There are not many ways you could turn a Monday into a Friday, but you could certainly find that chorus that will make it easier for a new start of the week to pass. That’s what I consider music should do, to embellish reality, not to change it. Hum a tune about how you don’t love a Monday, and in the end you might feel the opposite. What The Boomtown Rats did had to be carried on, and this remake only reminds us that Monday shall continue to be a “special” day.” – Bedroom Heroes

Irish pianist MOYLETT who co-wrote the song as a member of The Boomtown Rats called it a “gift” to return to the hit single. “It is great to turn a different corner and find a new story has begun. Monday is the first day of the week, it brings new energy, a freshness with the chance of new memories and trip the light fantastic” he states.

“I’m very excited about the collaboration with Bedroom Heroes and MOYLETT. I find the remake of the song “I Don’t Like Mondays” very cool and I’m honoured that I have the opportunity to give it my own touch., says Bedroom Heroes,” adds Nika. 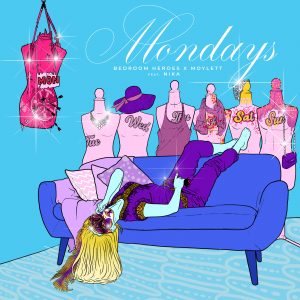