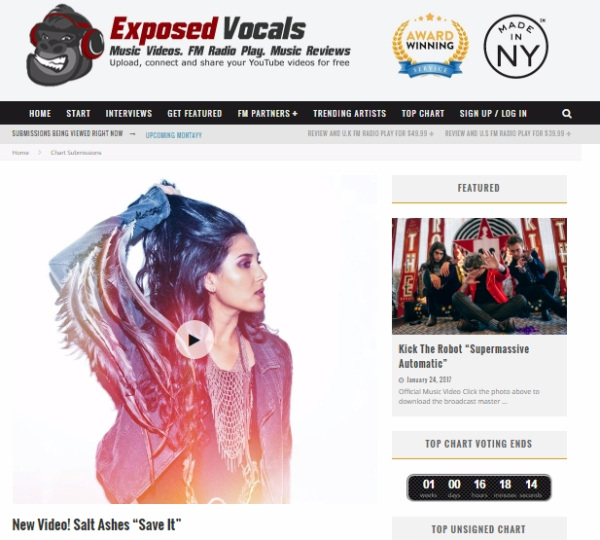 Salt Ashes’ “Save It” Music Video Featured on Exposed Vocals

Emerging UK electronic singer-songwriter Salt Ashes has released her brooding music video for the lead single, “Save It,” from her self-titled debut album. The video, directed by Salt Ashes and Ian Coulson, has been featured on music blog Exposed Vocals. Below you can watch the full music video and read parts of Exposed Vocals‘ feature. Be sure to head over to ExposedVocals.com for more.

Salt Ashes extraordinary lead single has received rave reviews from UK’s discovery site Record of the Day (“now comes this brilliant on-trend banger with one hell of a chorus and everything required to be an instant worldwide smash. Calvin Harris would probably kill for this tune”) as well as US tastemakers Idolator (“Salt Ashes has whipped up a firecracker with her new single.”) With a 90’s club scene vibe “Save It” is a breath of fresh air for electronic pop.
The ‘Save It’ music video, which debuted on Billboard January 2017, is an abstract and artistic piece of work which captures the darkness and beauty of fighting for a love that others do not approve of. Directed by Salt Ashes and Ian Coulson, the video displays intense passion, tension, and defiance, in which the song was intended to evoke