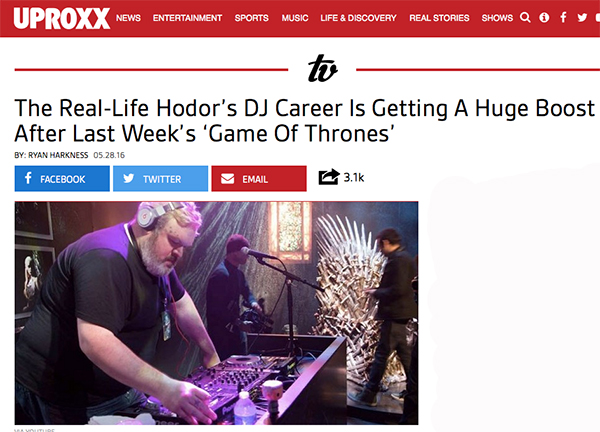 Before Kristian Nairn became famous world-wide for playing the beloved character Hodor on HBO‘s hit series Game of Thrones, he was a DJ who played progressive house music all over Northern Ireland. Due to recent events of Game of Thrones, Kristian Nairn’s DJ career has received a huge boost. Premier news and entertainment outlet UPROXX has uncovered all the information you need/want to know about DJ Kristian Nairn.

For the past three years, Nairn has been touring the world under the catchy ‘Rave of Thrones’ byline. No, that’s not a DJ name or moniker, but rather a package that club promoters can book that involves various Game of Thrones decorations and Nairn behind the decks. As someone who’s seen an early Rave of Thrones show in Toronto back in 2013, it’s a pretty cool experience. And it’s only getting more popular now that Nairn’s character Hodor is dead.

According to his booking agent Michael Schweiger, Nairn’s “demand has shot up, with offers coming in from all over the word. Funny how some people get famous after they die.”

With Hodor’s death scene being one of the most powerful moments in recent seasons, we’re sure he’ll be able to ride the Rave of Thrones gig for several more years to come.The big man’s got big talent.

Check out his most recent Radikal Records release, “4Love (feat. Salt Ashes)” below:

For more from UPROXX, visit: uproxx.com

Nairn’s singles Up / Beacon (feat. Leanne Robinson) and 4Love (feat. Salt Ashes). Both singles are now available for download on iTunes & Beatport, and for streaming on Spotify & SoundCloud.